Historical overview in the design zone – from the drawing board, through CAD to BIM

Mass culture usually depicts a designer as a person drawing a huge picture on a drawing board. The designer stands alone, lost in his thoughts and slowly, systematically pouring all the details of the design from his mind onto the paper. Everyone involved in construction design today knows that this image completely differs from reality. And although it looks different now, in movies and tv series, the profession of an architect is still presented this way, which can be frustrating for the designers themselves.

Before we move on to what the work of a designer looks like today, let’s consider to what we owe this image, displayed in film productions.

The widespread use of drawing boards dates back to the first and the second industrial revolutions, i.e. from the 19th to the mid-20th century. It was the time of crystalizing the profesions od building designers, defining the role of an architect, structure engineer, MEP designer, quantity surveyor and standarization of design drawings. In 1834 the RIBA (Royal Institute of British Architects) was established. in 1857, the AIA (American Institute of Architecture) came to existence, and in the years that followed, more industry organizations, crutial for the professionalization of building design, appeared.

These were also the times of many industrial projects setting new requirements for creation and circulation of information in the construction process. In the mid-nineteenth century, new inventions appeared which allowed for the mass reproduction of construction drawings.

The first widely implemented technology was Blueprint, which made it possible to duplicate drawings on photosensitive paper. Copies were in the form of white lines on a blue background. Subsequent improvements of this process led to the possibility of reproducing black and white drawings (whiteprint) and eventually to the well-known photocopiers that use electricity to create copies. In those days, a large part of the designer’s work was consumed by preparing drawings that were later replicated.

The development of electronically duplicated drawings with the simultaneous development and popularization of computers enabled the next step in the development of design methods. It consisted of replacing the physical original drawing (to be duplicated) with the one created on a computer and stored on its disk.

These were the times of the third industrial revolution, i.e. the second half of the 20th century. It was a time of successive drawing boards replacements with computers. Due to these changes the production efficiency of design documentation was fourfold, which resulted in increased accuracy of designs and reduced construction costs.

One of the most famous inventions of this period is the Sketchpad, developed in 1963 by Ivan Sutherland. This tool made it possible to draw on a computer screen with a light pen. The first commercially successful program was published in 1963 by Patrick J. Hanrattiegowe in collaboration with IBM, DAC (Design Automated by Computer). The most successful CAD program was AutoCad, which was first published in 1982. It was also the first CAD program designed to run on PCs, not mainframe computers like before.

The term “digital drawing board” has stuck to CAD software as, over time, it has completely replaced drawing boards as an architect’s tool. At the same time, the designer’s work philosophy remained largely unchanged, they had to first imagine the building then, on this basis, plot its elevation plans and sections, and make all the necessary calculations. CAD programs greatly improved the process of producing construction documentation, but did not do much in terms of improving the quality and accuracy of the design, as the designer still had to rely on his imagination to create the design. As technology advanced, buildings contained more systems (such as air conditioning, elevators) it became more difficult to coordinate them.

To solve this problem, there was a concept of transferring the entire building from the designer’s imagination to a computer disk, i.e. BIM. The concept is to create a digital twin of the designed building, which will have the same geometry and all physical and functional features. The drawings constituting the project documentation are to be generated automatically by the computer based on the building model.

The pioneers of BIM technology were Charles Eastman with GLIDE (Graphical Language for Interactive Design) published in 1977 and Gábor Bojár, the founder of ArchiCad (1982) and the long-time president of Graphisoft. ArchiCad (originally Radar CH) was the first CAD program available for PC and Mac. Revit, released by Revit Corporation and later bought by Autodesk, was the most commercially successful. BIM technology is a part of the 4th industrial revolution.

BIM (Building Information Modeling), i.e. Building Information Modeling, is based on a digital record of the building model, which is available simultaneously to all participants of the design and construction process. As a result, it is one source of building information, enabling efficient coordination of the design, which reduces construction costs by avoiding many mistakes and eliminating unnecessary processes. The data stored in the building model allows you to easily generate statements, tables, perform calculations and technical analyzes. BIM enables the visualization of an object, thanks to which architects, investors, contractors and future users can accurately understand the designed building. BIM assigns parameters such as price, thermal resistance, manufacturer’s name, density, strength, fire resistance to the 3D model  which allows for simulations and calculations, thus there is a thorough understanding of the designed building and facilitates decision making. 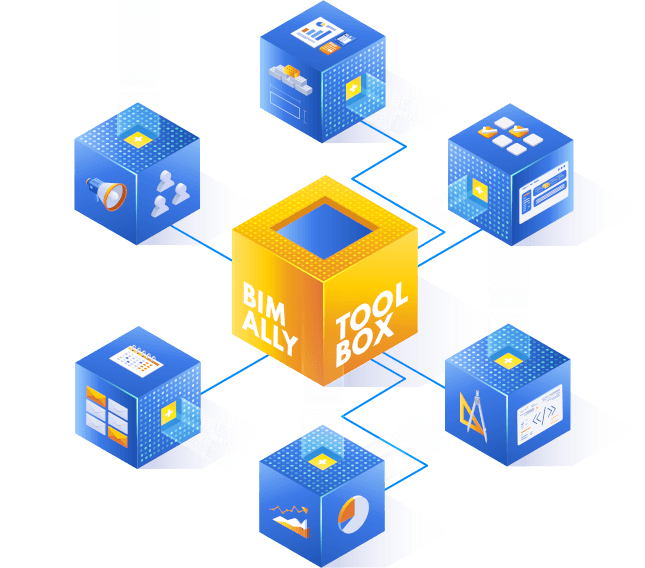 BIM ALLY TOOLBOX will equip your company with tools and services, thanks to which you will be able to effectively manage cooperation with both current and newly acquired designers.

Ready to start working with us?

Fill out the form and we will contact you as soon as possible.

Ready to start working with us?

Fill out the form and we will contact you as soon as possible.

We will show you how BIM Ally Toolbox will introduce your company to the world of digital construction. Fill out the form and arrange an individual presentation with us!

We use cookies on our website to give you the most relevant experience by remembering your preferences and repeat visits. By clicking “Accept All”, you consent to the use of ALL the cookies. However, you may visit "Cookie Settings" to provide a controlled consent.
Cookie SettingsAccept All
Manage consent

This website uses cookies to improve your experience while you navigate through the website. Out of these, the cookies that are categorized as necessary are stored on your browser as they are essential for the working of basic functionalities of the website. We also use third-party cookies that help us analyze and understand how you use this website. These cookies will be stored in your browser only with your consent. You also have the option to opt-out of these cookies. But opting out of some of these cookies may affect your browsing experience.
Necessary Always Enabled
Necessary cookies are absolutely essential for the website to function properly. These cookies ensure basic functionalities and security features of the website, anonymously.
Functional
Functional cookies help to perform certain functionalities like sharing the content of the website on social media platforms, collect feedbacks, and other third-party features.
Performance
Performance cookies are used to understand and analyze the key performance indexes of the website which helps in delivering a better user experience for the visitors.
Analytics
Analytical cookies are used to understand how visitors interact with the website. These cookies help provide information on metrics the number of visitors, bounce rate, traffic source, etc.
Advertisement
Advertisement cookies are used to provide visitors with relevant ads and marketing campaigns. These cookies track visitors across websites and collect information to provide customized ads.
Others
Other uncategorized cookies are those that are being analyzed and have not been classified into a category as yet.
SAVE & ACCEPT